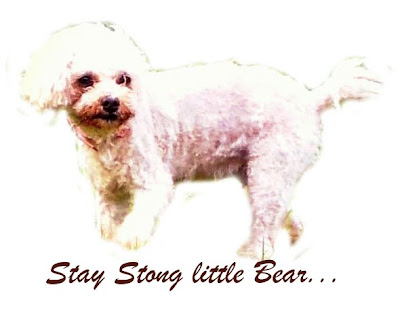 I knew something was wrong when Bear peed in the house… Not just a little pee, but a big puddle. She was drinking a lot of water and even though she was eating like crazy & always hungry, she lost 2 kilos in 1 month. These are all the initial symptoms on diabetes.
A few days later things changed abruptly… Bear went from playful and energetic to weak and sickly overnight. This was when I took her to the vet.
Having never been neutered, Bear was diagnosed with diabetes.
The only way to manage this is to remove the ovaries (hormones) so the blood levels can be regulated.

Bear was too weak to operate when she was diagnosed. Therefore we waited til today (36 hours later) to do the operation, hoping she would be she would get stronger…
Obviously we would never be able to get her completely strong while she still has her ovaries, but we got her as strong as possible.

The operation itself is not that risky. The first risk (after operating risks) is the fact that she is not young anymore. At 9 years old, she still has 6-9 years to live… but with operations, it is a risk.
The biggest risk is the diabetes. Keeping the levels right during an operation leads to greater risk of complications and death. Another risk was the fact that she went into the operation in a weaker state.

On operation morning there were only slight improvements. Nevertheless taking more time  to try to get her stronger outweighed the risk of operating in the current state.

She is in the operation now…  Good Luck!!

Bear has survived the operation but is in critical care. We are still at the vet anxiously waiting to see that Bear pulls through and speak to the doctor. - To be continued…...

Continued: Bear is at home now :)


They removed the ovaries (as planned) and decided to remove the uterus as a precaution.
Bear is still very sick and weak, as her glucose is still really high from the diabetes. She is also weak and in pain from the operation. She is still considered critical because now that her hormones wont be interfering with her glucose levels, it is possible that they shift too much.
I will monitor her throughout the night until we go back to the vet in the morning.
-We have a long road ahead to recover and stabilize the levels; but we are on the side of this.
If there are no complications through the night (after she gets insulin), than she is expected to be ok. Once we stabilize the levels she can live a long happy life.


Now that we have got past the scariest part of this, I feel really good about everything. Once she recovers and we get the diabetes under control, Bear can live out her full life… happy & comfortably. The whole thing is EXTREMELY expensive. The vet said that if you cannot afford it, we should kill her (as death from diabetes is very painful).  This was something I could not even consider…  I would rather pay for even if she died in the operation, I would still have rather done everything to save her, than decide that the price tag on her life is too high… A couple thousand for another 5-9 years with Bear is not that much. People purchase dogs that have a 12 year life span  for the same amount…I don't know how I am going to do it, but I am so glad I did.As pet parents, it is our responsibility to do what is best for our pets and do everything we can. To all those who advised me to give up & kill my dog: (Let me put it nicely…) "You probably should never take on the responsibility of pets"To those who are supportive: "Thanks so much… Bear also appreciates your support & wishing her well."

Last night was very scary. After Bear got her insulin she was breathing really fast and appeared out of it. When the insulin was out her her system we went to the vet to check her levels to see how the operation impacted everything.We were so pleased to find out that Bear's glucose level dropped significantly… She is nearly balanced on her own (without insulin, while in recovery). This improvement means that we no longer need to do the injections. We can manage her levels with special food and and strict schedule and diet.We hope that the body forgets about the diabetes and she can go back to eating and playing like before.At this point, the prognosis could not be better. But we should try not to get to excited yet.

Bear is doing better than expected. Without treatment of diabetes, she is recovering very quickly. However, I am still concerned that she is still has diabetes. We will check her levels again tomorrow. She is no longer drinking too much water and her energy is much higher. If she was not crying throughout the night I would be a lot more confident.

Bear stopped crying and got healthier every day. Since the operation, her levels got better on their own. She didnt get any insulin since. Instead she was on a special diabetic food. .Recovering from the operation happened very quickly. She was noticeably stronger every day.Our next check-up was planned for Friday (26th). However, on Thursday (25th), I suspected that she made a turn for the worse. I wasn't sure, but my feeling was strong enough to see the vet today (instead of waiting for tomorrow).
The vet appointment revealed that my feeling was right…. Bear's glucose had increased and she had lost 1/4th of a kilo since the last appointment.Her levels were not nearly as bad as before the operation, nevertheless, she needed to go back on insulin. :(As disapointing as it is, we are still hopeful that she will beat the diagnosis over time.
In 1 week we will check her progress and go from there

Bear is doing much better….
She is getting stronger every day. It is so nice to see her getting back to her old self.
With getting stronger, she is also less cooperative her daily injections.
There were a few days where giving the insulin injections were a real struggle.
Insulin has to be given twice a day, 12 hours apart, immediately after she eats.
The timing itself has not been an issue so far. However, the pressure from sticking to it can make things very stressful.

The idea is to use the combination of food and insulin to create balanced glucose levels.
Food brings the glucose up, while the insulin brings it down… Both insulin and food absorb and work through the body at in about 12 hours, peaking at about 6-7 hours.
Therefore, it is crucial to give the insulin right after the food. Giving it too late results in food and insulin peaking at different times, which means the levels are not balanced. This could even be very dangerous if glucose levels drop before the food has a chance to peak or has already peaked.

Not used to getting injections, Bear is pretty fussy with the process. I try to do it as fast as possible, but she has lost so much weight, that finding a good place to inject takes a minute. 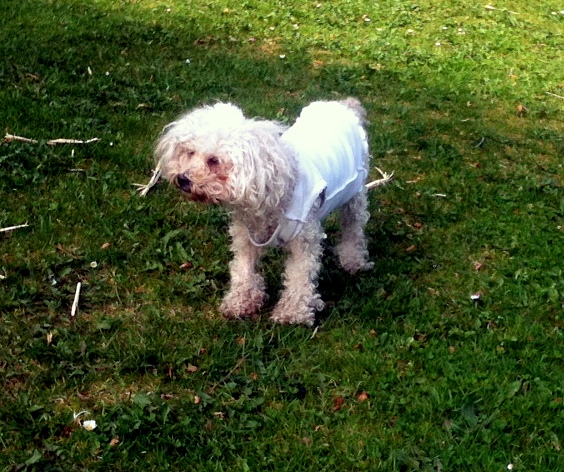 Being a little drama queen, lifting the skin is already a reason for her to cry and fight. I try to tell myself that she is just being dramatic… that this is no different that the way she acts when I cut her nails… but there is just something about holding the needle in your hand and sticking it into her. The process is something that takes a little time to get used to (especially when it is with your own dog).

As time passed after Bear finished her meal, the pressure to give the injection becomes enormouse. Because things didn't go well the previous times, my nerves got the best of me. Of course, my nerves also got the best of Bear.
As a result she missed her injection 1-2 times in a row. Both times I tried to give it, but when she flinched the needle came out. There was still 1 unit of insulin the syringe, and I couldn't say whether or not she got the rest (so I could not give more).
As the day progressed, I could tell be how much water she was drinking that the insulin did not go in.
Because the insulin was irregular, we had to postpone the vet appointment.
The stress from the difficult times carries over to the next time.

When I got help, I was able to get my confidence back. Bear has been getting her injections consistently for the last 4-5 days.
Our appointment is tomorrow.
I expect that she needs a higher dose of insulin. Nevertheless, I can see progress all the time.

Bear is doing much better… her levels are still not stable, but we are getting closer & familiar with the process. She seems to be getting used the the many injections; however, I am looking forward to the day that she simply eats ger food and then sits to wait for her injection.


She is smart enough to pull that off ( I expect nothing less).
As you an see, when her levels are at their best, she is back to her happy playful self.
"Thanks for the new toy Aunty Hope Rosenbaum…X"
See more on Bear and other HH pack members at www.facebook.com/hondentrimmer

concentrating on customer satisfaction… your comments and feedback is appreciated.
Contact directly at HollywoodHonden@gmail.com
Check out the dog services at: http://hollywoodhonden.blogspot.com

Promote Your Page Too

Click the Service Packet bellow for more info.
CLICK HERE to Send a Request for…
… other service packets and Service Rates